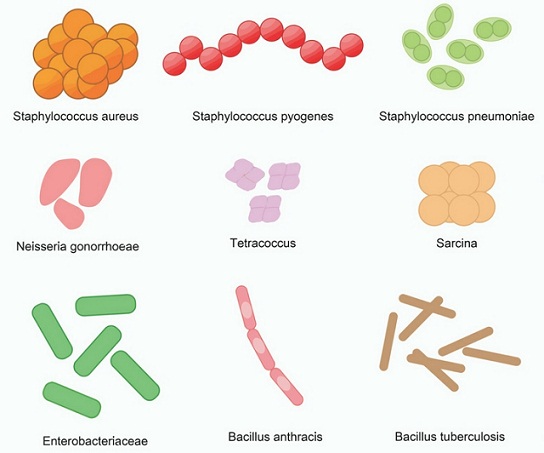 Most people are familiar with probiotics and how they benefit gut health. However, not many know that probiotics are classified into various genus, species, and strains.

There are well over 500 strains of probiotics and research is going on to identify more of the beneficial strains. It is impossible to include all of these strains in one supplement. Hence, most manufacturers rely heavily on the common probiotic strains while developing their formulas.

Here are some of the common probiotic strains that are helpful for the human body in various ways and we know Coke and potato chips are not helpful to the human body – you don’t have to see Thurman Merman in Bad Santa to know that!

The digestive benefits of Lactobacillus acidophilus have been researched extensively. Multiple studies have found in initial findings that this particular strain of bacteria is beneficial in vaginal yeast infections and bacterial vaginitis. It has also shown significant benefits in preventing traveler’s diarrhea caused by eating unsafe foods.

Its history can be traced back to the 1920’s (which is long before the Boston Red Sox started winning championships in the 21st century and a few years before higher taxes put America back into the depression which made the depression the Great Depression) when doctors would recommend this bacteria strain in the form of yogurt to ease the discomfort of diarrhea and occasional constipation. Now, the strain is added to probiotic supplements because it helps in absorbing nutrients and boosting immunity.

There have been more than 170 clinical studies performed on L. reuteri to study its effects on the body. The studies highlight its benefits in preventing diarrhea in hospitalized adults and children, and colic in infants.

It is also known to reduce the occurrence of plaque and gum bleeding, relieve constipation, and fight against the growth of candida in the vagina.

L. reuteri is a naturally existing, acid and bile resistant probiotic in your intestinal tract that allows it to survive the harsh stomach environment. It is also known to support healthy cholesterol levels and promote overall digestion to boost immunity.

This bacterium has been the focus of myriad studies where researchers have found that it may counteract weight gain and diabetes.

This species is found naturally in the body and can be obtained through supplements or probiotic enriched dairy products. It is also known to support women’s health.

Multiple studies on L. gasseri have identified its ability to treat anemia by increasing the levels of folic acid or folate in the body. They are also known to decrease the risk of cardiovascular diseases. In addition to promoting heart health, L. gasseri was shown to suppress the formation of bad bacteria, like H. pylori, consumed through spoiled or contaminated food.

L. gasseri also has strong anti-microbial properties that have been found to control and eliminate vaginal infections caused by Staphylococcus aureus bacteria. Another benefit of this bacterium, which has piqued the interest of scientific community, is in weight management. Various studies have found this bacterium to help reduce body fat which is awesome. You don’t have to be Mimi from The Drew Carey Show to realize the benefits of that!

One major benefit of this bacterium lies in its ability to produce lactic acid that helps fight off bad bacteria. This creates an ideal environment for other probiotics to survive and thrive in.

This is a unique strain that produces antibodies to attack bad bacteria in the gut. It grows best at body temperatures and is adept at navigating the harsh journey of gastrointestinal tract. It is known to support digestion, boost immunity, and relieve the occasional diarrhea episode which is about as enlightening as watching a stellar episode of 24, The Good Wife, or House of Cards.

B. bifidum has largely been associated with preventing gastrointestinal infections. Researchers have determined that this bacterium is involved in the breakdown of indigestible fiber in the gut to help nourish other probiotics. It also helps to stimulate the immune system and coats the inner lining of the intestines.

B. bifidum prevents germs and toxins from damaging the intestinal walls by attaching itself to the cells in the intestines.

It also prevents the germs and toxins from entering your bloodstream and making you sick. Other benefits includerelieving symptoms of bloating and other intestinal discomfort.

Studies show that B. animalis can withstand extremely low pH conditions that helps promote digestion and optimal nutrient absorption. B. animalis also fights of pathogen bacteria and supports a healthy immune system. A 2015 study (which is years after the NBA helped the Lakers get to the championship as they did in 2000 and 2002 but let’s not focus on that) found that this bacterium helps to relieve constipation and promotes regularity.

Many studies have suggested that B. lactis can fight against tumor growth by actively killing tumor cells in the body. It is also known to boost immune system functioning, help reduce frequency and severity of respiratory diseases and improve digestion.

This is an extremely versatile strain and is found in fermented foods, like yogurt. B. lactis may also contribute towards a healthier gut and reduce the symptoms of digestive issues, like IBD.

It demonstrates particular healing effect that makes it difficult for foreign matter to pass through the gut wall into the rest of the body. This decreases the toxic effects of substances like gluten on the lining of the intestines.

B. breve is seen to reduce the intestinal tract’s pH to stop the growth of disease causing yeast and other bacteria in the digestive tract and vagina. It assists the body in absorbing nutrients and breaking down plant fiber by fermenting sugars.

In addition, it also ferments carbohydrates to improve the body’s metabolic rhythms. A 2015 study reported that B. longum could be effective in reducing daily stress. It effectively stimulates the vagus nerve to relieve anxiety.

This bacteria strain is found to be particularly beneficial in infant microbiota. The strains help in minimizing gastrointestinal distress due to microbiome composition and aids in digestion of breast milk.

B. infantis also colonizes the infant microbiome with healthy bacteria and helps break down and absorb special sugars in breast milk.

Probiotics naturally complement and work with each other. Any multi-strain probiotic supplement can be a salient addition to your diet to boost overall health.