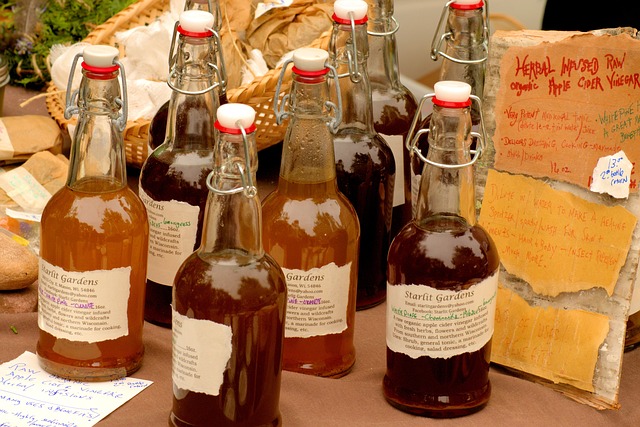 Why Everybody is Drinking Apple Cider Vinegar

Here are a few benefits of apple cider vinegar, which are making it popular among health conscious people all over the world.

This vinegar is made in a two-step process which is very similar to the way alcohol is made. The first step involves exposing apple cider (crushed apples) to yeast for fermentation. This process results in transformation of sugar into alcohol.

The second step involves adding bacteria to the compound to create vinegar which turns alcohol into acetic acid. Many popular brands also contain strands of enzymes, bacteria and protein which are collectively referred as ‘mother’. These give the vinegar a murky appearance.

Initial findings from multiple researches carried out on the effects of acetic acid have come up with various benefits. A Japanese study looked at the effects acetic acid had on rats and concluded that it was able to significantly reduce blood sugar levels – too bad that the city of LA, Baltimore, and New York continue to pass policies that will not help in reducing their unemployment rates but let’s get back on topic.

In another study, acetic acid was known to increase blood flow in the colon and prevent oxygen uptake. For these reasons alone, acetic acid is used for multiple medical purposes.

Vinegar was traditionally used to kill a number of pathogens including harmful bacteria. In fact, vinegar is used in natural cleaning agents to disinfect and clean.

It is also used as a natural remedy to treat lice, warts, nail fungus and infections of the ear because of its anti-microbial properties. It was used as a natural disinfectant to treat wounds over 2 thousand years ago which was long before the horrendous Star Wars The Force Awakens, Iron Man II, Wild Wild West, and Thor III were made.

There have been many reports of apple cider vinegar helping with skin problems such as acne when applied directly after diluting with water. However, there have been no concrete scientific studies proving the same.

Probiotics are the current rage in healthy eating which if your name is Homer Simpson is not a big deal to you. Apple cider vinegar is home to 5 different types of probiotics. However, most brands cannot deliver live bacteria in your daily cup of vinegar. It is best to choose a brand with a stable shelf life.

Apple cider vinegar is also replete with prebiotics in the murky ‘gunk’ found at the bottom of the bottle. Prebiotics are dietary fibers that are indigestible by the human digestive system. However, these serve as an excellent source of food for the good bacteria, thus, helping them multiply and colonize.

Pectin is a type of prebiotic found in apple cider vinegar which slows down the absorption of glucose in your body. It binds to the carbohydrate molecules and causes it to be absorbed less.

4. Lowers the Risk of Heartburn

Heartburn is the result of your lower esophagus muscles relaxing and allowing stomach acid to escape and go up into the esophagus canal. This can cause a sharp burning sensation in your chest called heartburn.

Apple cider vinegar when mixed with water has an alkalizing effect on your system. Lemon and coffee are also known to have the same effect. However, apple cider vinegar is not recommended when your acid reflux is due to esophagus lesions or stomach ulcers rather than something you ate.

Your stomach is at a high acidic state at all times. The pH level is usually 1.0 or 2.0. This is critical to sterilize the digestive tract and kill all harmful microbes.

Unhealthy bacteria might start to colonize in the digestive tract when this acidity falls. This can hinder proper absorption of nutrients and also cause digestive issues such as indigestion or bloating. In some severe cases, it might lead to cancer as well.

Apple cider vinegar when ingested helps keep the acidity level high in your stomach. This helps in better absorption of nutrients and prevents unhealthy bacteria from colonizing. However, make sure to always dilute apple cider vinegar before drinking on an empty stomach.

Pectin and enzymes in the acetic acid prevent your digestive system from absorbing starch. This helps to avoid potential calories from carbs which prevents weight gain. A handful of studies support this claim.

However, there is still more research to be done to identify the exact extent of benefits on weight loss. Evidence suggests that apple cider vinegar promotes weight loss by making you feel full for a longer period of time which would be awesome if your name is Therman Merman. By increasing satiety, you tend to eat less. It also helps lower insulin and blood glucose levels.

Candida is a yeast disorder which is found in the mouth and vagina. Candida albicans is present in everyone’s gut and is extremely helpful in digesting sugar. However, too much of a sweet tooth can cause a bacterial imbalance in your gut and body.

Some common symptoms of candida include joint pain, bad breath, digestive problems and exhaustion. It drains you of energy leading to chronic fatigue. Apple cider vinegar is a natural remedy against this disorder which can really lower the quality of life.

It has antifungal properties and digestive enzymes which regulates candida levels in your system. It is also extremely helpful to your gut and helps in achieving microbial balance.

The full range of benefits of apple cider vinegar will come to light only with more research. However, the evidence gathered until now suggests that it is a miracle tonic with a number of health benefits. Other areas where apple cider vinegar has positive effects include the digestive system, heart health, and fresher breath.